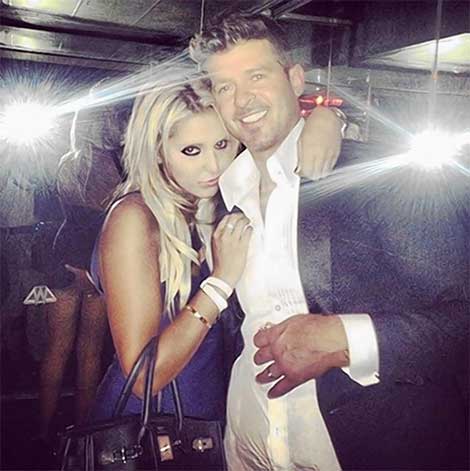 Robin Thicke’s mistress, Lana Scolaro, has come forward claiming that after she had sex with the “Blurred Lines” singer, he introduced her to his wife Paula Patton.

“Then, the 21-year-old London native attended the MTV VMA’s in New York City where she said they only shared a passionate kiss, however now the singer’s fling has revealed that she indeed had sex with the star and shook Paula Patton’s hand right after.”

“We had sex at the party. We were among the first people to arrive in an elevator together and got to talking. We both got drinks at the bar, and Robin suddenly grabbed my hand and led me to a back room, where all the lights were off. It was really dark, and no one was around.

His hands were all over me. I thought that’s all we were going to do, but he started going down, and it just happened. It wasn’t romantic, just really steamy and fast, like he knew he was doing something wrong.

I shook his wife’s hand right after we had sex. I had no idea he was even married. I was mortified. Robin was just acting totally normal, chatting with the both of us and having a good time. What we just did didn’t seem to faze him at all.”