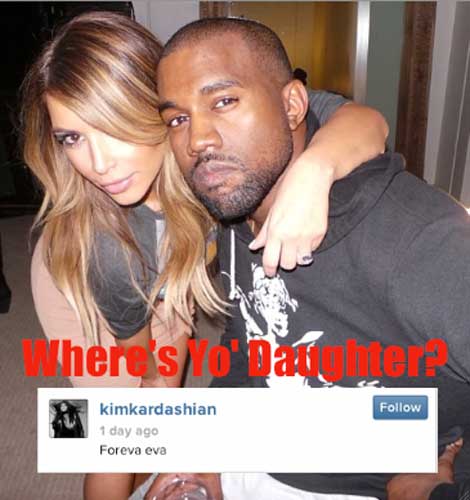 Kim K’s left parenting five-month old baby North to a “hired nanny.” In her own words, just because she’s a mother doesn’t mean she’s not “allowed to have fun.” This isn’t surprising, especially when considering the scandalous seed she comes from.

“When other new mum and dads are home looking after the little one … KimYe are most often seen globetrotting and enjoying a carefree life without being hindered by feed times and changing diapers.”

“Kim has been acting like the ultimate fan while following her fiancé on the road, by tweeting about their every stop along the way. She even missed her family’s traditional Thanksgiving dinner on Thursday, and skipped little sister Khloe’s ‘famous macaroni and cheese.”