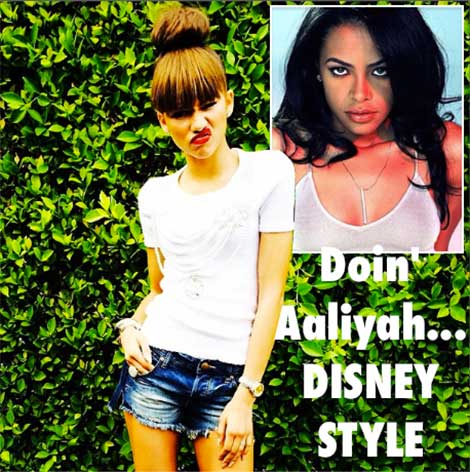 “Get behind her mother and brother and only be okay if THEY are okay with it.” -Monie Love

Monie Love, Missy Elliott and many members of the Hip Hop community are boycotting Lifetime’s biopic based on Aaliyah — calling the biopic “unethical”, noting “some legacies should remain as is.” Word from the industry reveals both Missy and Timberland have refused to take part in a soundtrack to the TV movie — while Monie Love has drawn attention to Aaliyah’s mother and brother, who she says were not consulted for any part of the project, “based on Christopher Farley’s best-selling biography Aaliyah: More Than a Woman.”

Here’s what Monie Love took to Twitter to say:

This news comes after producers of the project announced the Disney actress chosen to play Aaliyah, 17-year-old Zendaya Coleman. The news has rocked the Hip Hop world — especially since it appears Keshia Chanté was kicked to the curb for Coleman. Aside from Aaliyah’s story likely being nothing more than a ‘legends have it’ thing to the teen, Coleman bears NO similarities to Aaliyah’s appearance.

“According to her bio on IMDB.com Coleman’s father is African-American, and her mother is of German, Irish and English ancestry.”

Here’s what the film’s casting director, Twinkie Byrd had to say:

“Zendaya embodies everything you want in a actress to play Aaliyah. She is a poised, professional, strong actress. A triple threat actor, singer dancer. She loves Aaliyah and will do a wonderful job! She is of mixed ethnicity. Her name is Bantu (Zimbabwe) meaning ‘To Give Thanks.’ Let’s not hate on it but congratulate! She is a great choice!”