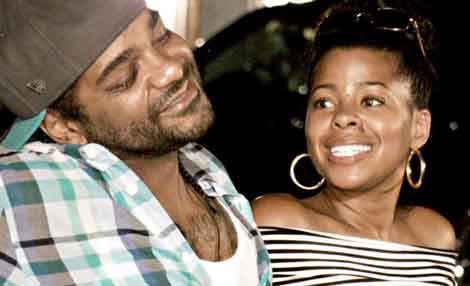 Some information landed on my desk this morning about Jim Jone’s fiance Christine “Chrissy” Lampkin and guess what? I’m going to share it with you.

Here’s what was revealed about Chrissy Lampkin:

“Chrissy has been hustling since she was 15 years old. She’s now 42, and she’s been using her p*ssy to get Gucci and gold.

Chrissy and her crew were involved in different crimes like credit card schemes, shoplifters, mules from NYC to D.C. They were setting up dudes to get robbed. Chrissy has dated dope boys like the infamous drug kingpin Alpo Martinez and his partner Rich Porter also three New York Knick players. She even slept with Jay Z when he was 23 years old.

Chrissy’s last trick/sponsor/boyfriend cheated on her with a popular video hoe. Chrissy decided to rob him for $32,000 then she ran to Miami to shop and have fun on his dime. Then dude and his crew tracked Chrissy down. The Nicca knocked out her front teeth and in return Chrissy had her peeps send him a message that if he does not pay for her dental bill and buy her breast implants he’s going to get hit with the Rico Act. Dude paid all Chrissy’s bills and that was the end of her and street dudes.

Chrissy took her skills to reality television hoping her broke rapper boyfriend will help her to continue to live a easy lifestyle.”

Everybody already knows that Jim Jones fiance Chrissy had a shady x-rated past and guess what? Reality shows are using women like Chrissy to mislead our young teenage girls. Don’t believe me? Ask Kim Kardashian.