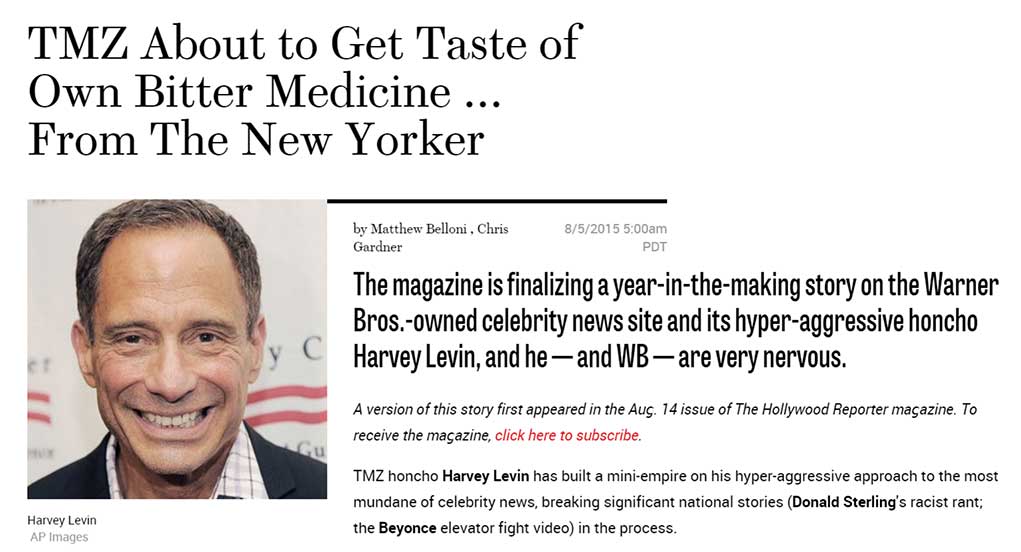 The New Yorker is finalizing a big exposé about the controversial gossip site TMZ.

The magazine’s investigative piece was a year in the making, by reporter Nicholas Schmidle, who was previously nominated for a National Magazine Award for “Getting Bin Laden,” a 2011 chronicle of events leading up to the raid on the terrorist leader’s compound in Abbottabad.

“Harvey Levin, the mastermind behind TMZ, is apparently nervous about what the piece holds — or at least nervous enough to tell staffers not to talk to reporter Nicholas Schmidle.”

As The Hollywood Reporter points out, TMZ is both a cash cow and something of an embarrassment for Warner Bros., which owns the outlet:

Levin and TMZ are not often discussed on Time Warner earnings calls, but by most accounts the outlet is said to make tens of millions of dollars for Warner Bros. each year, mostly from the syndicated TMZ newsmagazine television show, which Levin hosts. The former lawyer’s ability to procure court documents, celebrity death and divorce news, sex videos and other unflattering tidbits have led to speculation — especially in L.A.’s legal community, which often grapples with TMZ — that the outlet is paying sources handsomely.

The full article is scheduled to appear in the August 14, 2015 issue of The New Yorker.