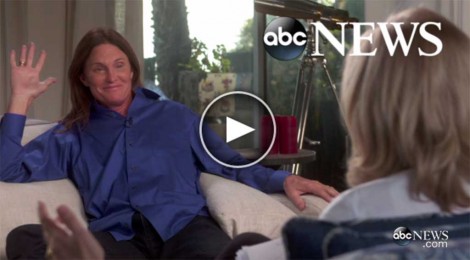 “We’d done 425 episodes over almost eight years now and the entire run I kep thinking to myself, ‘Oh my god, this whole thing, the one real true story in the family was the one I was hiding and nobody knew about. Yes, for all intents and purposes, I’m a woman.“

The shocking interview aired tonight…and really it just confirms everything HSK has been saying about the Jenner/Kardashian Klan for several years now.

Jenner has long hair again and is taking female hormones, saying “just kind of takes the edge off.”

In regards to full surgery, the transgender community asks that everyone respect others’ privacy and to steer away, but Jenner was open to taking about his decision in his interview with Sawyer, saying he has not decided anything yet and “Those things are all things that are out in the future for me to explore.”

Though any steps forward would include at least a year living as a woman as well as references, and even though Jenner said he already has those referrals.

Jenner showed Sawyer a closet of women’s clothes and told her how he hosts “girls’ nights” at home with the curtains drawn. Jenner also plans to change his gender identity on his driver’s license.

Jenner has received love and support from family and friends, who said it will be an adjustment.

“I asked him, you know, ‘What do you want us to call you?’” said Jenner’s oldest daughter, Cassandra Marino. “And he just interrupted me and just said, ‘I’m Dad. You know, you can call me dad… I will always be your dad.’ And that was just a huge relief.”

ABC News reached out to Kris Jenner for this report, but she declined to comment.

Jenner’s fashion style will be more “conservative” than his famous stepdaughter Kim Kardashian, and he said he will change his name, though he joked that his new moniker will not start with a “K.”

A perfect day, Jenner said, would be to have just “an ordinary day that she can go out and enjoy herself, and not have any lies, have a great lunch, … not being harassed by people, being accepted by society.”

“I just like blending in,” Jenner added. “That’s all I want to do is just blend in.”

As for getting married again, now that this path of transition has started, Jenner isn’t sure.

“I can’t even figure that side of it out,” Jenner said. “I just want to have a free soul, and have a lot of great friends.”