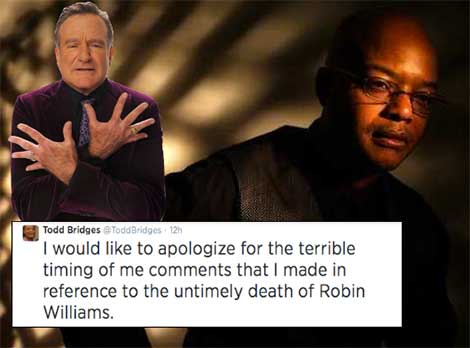 Word that Robin Williams had taken his own life is something that definitely struck a chord in Todd Bridges. Know why? The iconic figure in Black television history reveals Robin’s self-inflicted death comes about a month after the ‘Different Strokes’ actor was forced to deal with one of his closet friends checking out Robin’s way.

‘I am sure that my attitude toward Williams’s death was a delayed reaction of my best friend’s death.’

“You don’t think that my life has been hell and I’ve had so many ups and downs now,” Bridges tweeted moments after getting word on Williams. “If I did that, what I’d showing my children is when it gets tough that’s the way out . No, you gotta buckle down and ask God to help you. That’s when prayer really comes into effect.”

“Rest in peace Robin Williams I hope you found what you were looking for.”

Todd has since taken back to Twitter to say this: