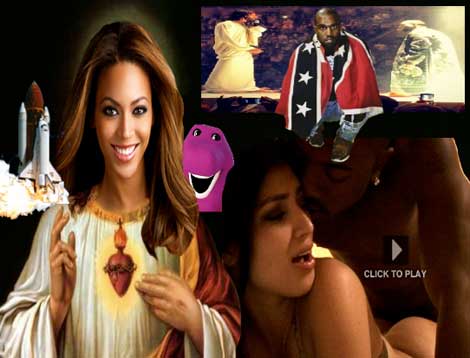 The Missus’ Of Controversy …

HSK Exclusive – As word spreads of Beysus turning down Ms. Yeezus’ invite to be a bridesmaid invite in she and Kanye’s wedding, has anyone considered the pair of publicity-pros could have plotted that very story together?

“Beyonce has made a conscious effort to be as uncontroversial and private as possible, while Kim has shared each and every detail of her, often chaotic life with the public on her TV show.”

Check out what Star Magazine reports:

“Kim asked Beyoncé to be a bridesmaid to which the singer immediately refused. She had been going around, bragging about how much Beyoncé wanted to be in her wedding … and was reportedly embarrassed when the reigning queen of pop turned her down. The voicemail was very unexpected considering the fact that Beyoncé does not even respond to Kim’s calls. Though Queen Bey tries to be cordial with Kim and her family, ‘she still finds her family unbearable.”