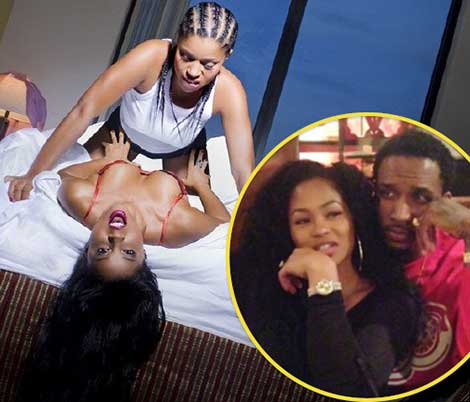 Tae Heckard is reported to have “just filed papers to legally end her domestic partnership with her former lover Monique Blanton.” This news comes about a month after reports Jennings confirmed his engagement to the video vixon — whose full name is Lashontae Heckard.

To be sure, questioning if Tae could have inked a deal to serve as the Pistons player’s beard would not be reaching. Know why? Tae’s track record is one which includes connections to Omarion and Nelly. Enough said!

“Tae recently filed to end her domestic partnership with estranged wife, Monique Blanton. Although the two have been separated since 2011, citing “irreconcilable differences” in legal documents, as far as the courts are concerned, they’re still very married. The women tied the knot back in 2008 and Tae even took on Monique’s last name. But, for whatever reason, things didn’t work out for the two. Now, Tae is hoping to have her name restored back to Heckard. Of course, this process is absolutely necessary if Tae and Brandon are seriously considering getting married.”