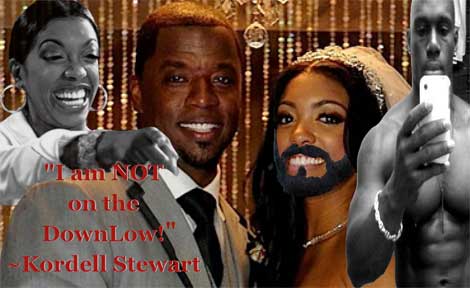 “Are you kidding?! After this three-plus million dollars I done put into this wedding and this house!” ~Kordell Stewart

As Kordell Stewart continues to deny lingering gay allegations — which he says were started because he “wasn’t playing good football” — Rumor or Not — Porsha Stewart knew exactly what she was signing up for when she married the former NFL quarterback.

That’s coming straight from Kordell Stewart, who’s revealed he gave Porsha the drop from the getgo.

“When I was dating my wife, I would say maybe two to three weeks into our relationship, I said I wanna talk to you about something real quick if you don’t mind.

I said we havin’ fun and we like each other and we’re about to move forward in this relationship and I just want you to know there were rumors about me way back in the day.

I brought it up because I wanted her to know so she don’t get caught all up with the foolishness. She responded to me, ‘I heard, no big deal about it, my brother kinda mentioned some stuff. No big deal, I know a lot of guys who are gay.’

I said nah that don’t have nothing to do with me. I’m telling you about a rumor that’s floating around about me before you get caught up into this relationship and find this out from the backside.”