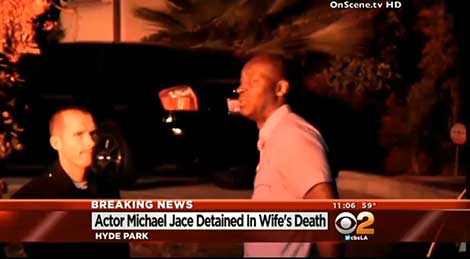 Update: Law enforcement sources say … Jace’s 2 kids witnessed him allegedly shooting and killing their mom.  The kids — both under 10 — were extremely upset and taken to the police station.

Jace best know as Detective Lowe from “The Shield” — was taken into custody and as of 3:30 this morning, LAPD has confirmed Jace is being booked and charged with the shooting death of his wife.

“According to law enforcement sources Jace called 911 around 8:30 PM and told police … “I shot my wife.” Jace’s neighbors in the Hyde Park area of L.A. had reported shots fired in the home … and shortly thereafter Jace made his call to 911.

Sources tell us the actor stayed on the phone, as instructed, until LAPD arrived and found his 40-year-old wife, April Jace dead.

Jace was home alone when his wife arrived with their kids … a short time later he allegedly shot her.”