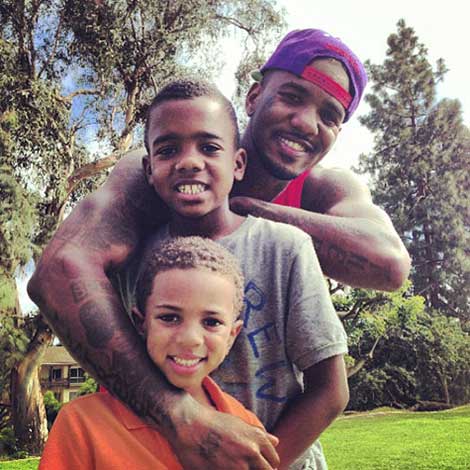 The Game is speaking out about being separated from his kids. In case you forgot, The Game, has been in hiding since it was revealed that LAPD had opened a domestic violence investigation into allegation by his finacee, Tiffney Cambridge, that he “repeatedly beat her in the face, injuring her eye socket and breaking her nose. Injuries that police say are documented and photographed for evidence. According to Tiffney, “God knows the truth.”

Here is what Game took to social media to share:

“Doing the best I can not to break.. But it’s funny how someone you’ve done so much for can be so ugly & cruel as to keep my children away from me vindictively because I’ve decided to move on with my life” Game posted, ” I love all 3 of my kids more than life itself & it’s one thing to keep me away from them.. & them away from me but @harlemcarontaylor hasn’t seen his younger brother or sister in a month & just texted me ‘Dad, how come Justice can’t come to my house’ & I have to lie to him because he’s to young to understand the real reason why.

I know they ask about me, I know they love me & I know they miss me as much as I miss them but were not allowed to see each other & for what??? As if I haven’t been there for them every day since the day they were born They are the only reason I care about breathing another day on earth. They are the sole reason I have become a better person.

They are the reason I give back, the reason I help people & the reason I wake up everyday with a smile on my face. Most importantly… They are MY CHILDREN & we deserve to be in each other’s lives forever. What kind of person would get in the middle of someone’s devoted fatherhood when there are countless women out here that are raising there children on there own with no one to help. You would think a father that loves his children the way I do would be the least bit appreciated & not have to beg someone to see his own children. I have worked so hard at being a good parent only to have it taken away by someone who cares not about me, nor the welfare of our children but only about themselves.

All of this just so you can keep me away from Justice on his birthday. What lie y’all gone tell em’ when his Daddy ain’t there ? Like I have been the past 6 birthdays ? The past 6 Christmas’s ? The past 6 years of a sons life whom got his name from a father that patiently awaited his arrival here into this world ??? & Cali….. I’m not gone even start.. I will end this by saying…. Daddy loves you…. Misses you… & will always be here no matter what happens !!!! I am a REAL FATHER.”