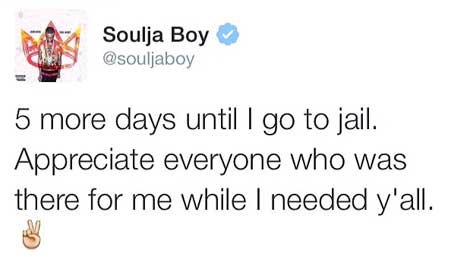 Soulja Boy, whose real name is DeAndre Way, took to Twitter to share “5 more days until I go to jail. Appreciate everyone who was there for me while I needed y’all.” Though he failed to mention what he is being locked up for.

Last month, SB was arrested in the San Fernando Valley for carrying a loaded gun. Allegedly, he was pulled over after running a stop sign in the Los Angeles suburb on January 22. The officer reportedly saw him carrying a loaded gun and he was booked on a felony charge.

“It’s just being young and being successful,” Soulja said of the arrest in an interview with DJ Whoo Kid. “I feel like, if I was a regular person, it wouldn’t get promoted in the media. Me and Bieber we were just chilling. We just young and having fun. They pulled over the Bentley, they pulled over the Ferrari. Why are they pulling us over in the first place? We just gone deal with it. All my fans that’s been rocking with me through everything I salute to y’all and appreciate the support.”