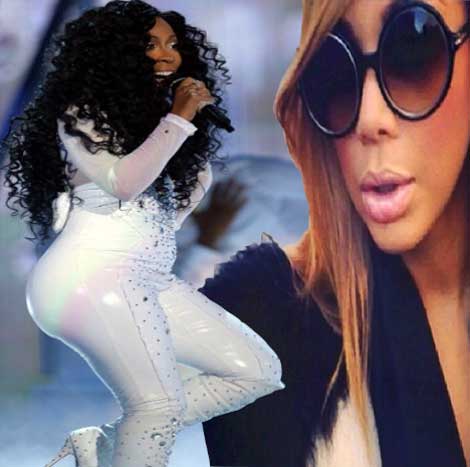 First, K.Michelle was lookin’ to squash the beef between she and Tamar. Now, the former LHH personality is singing an entirely different tune!

“The single ‘She Can Have You’ is from Braxton’s 2013 album, Winter Loversland, which released last November.”

“Back in December, K. Michelle congratulated Braxton on her Soul Train Awards win and asked to end the feud. “I’ll try this 1mo time. Congrats @tamarbraxtonher We both been through hell fighting 4a dream. Let’s cut the shit and inspire,” she tweeted at the time.

The feud between the ladies first started back in August after the Love and War singer acccused K. Michelle of copying her style after she changed her hair color from red to blonde.

Meanwhile, K. Michelle won’t be returning to season 5 of Love & Hip Hop New York. Instead, she will be starring in her own reality show, entitled, No New Friends.”