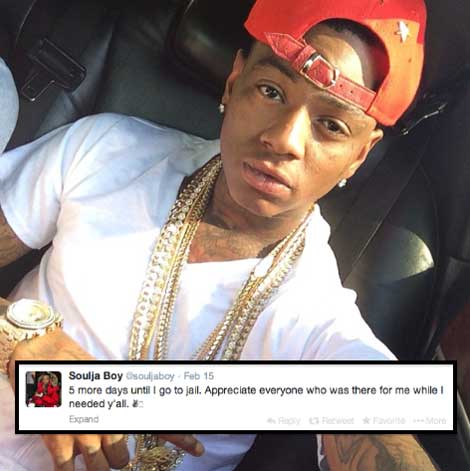 “I got a name and they go after anybody with a name. I ain’t scared.” ~Soulja Boy

He may flaunt a ‘Pretty Boy Swag’ image — but Soulja Boy says he’s far from being shook in lock-up. If he held true to his words, Soulja Boy would have turned himself in to begin a jail sentence, yesterday [Feb. 20, 2014].

Sources say.. ‘it’s unknown how long he will be locked up for, or where. He was arrested in Los Angeles less than a month ago on gun possession charges, but he also was arrested in Georgia back in 2011 on felony drug and weapons charges.’

“February 20th, yup. [What’s it for?] Gun charge. I just know that February 20th, it’s when I know how long I’ll be behind bars – and what they’re going to do with the case. … On the whole situation – I’m a young, successful rapper, I do a lot of stuff. Instead of me being targeted – it’s other criminals they could be attacking instead of focusing on me. … I got a name and they go after anybody with a name. No matter who it is. … I ain’t scared. It just is what it is. I done been to jail before but not for this long of a time it’s gonna be.”