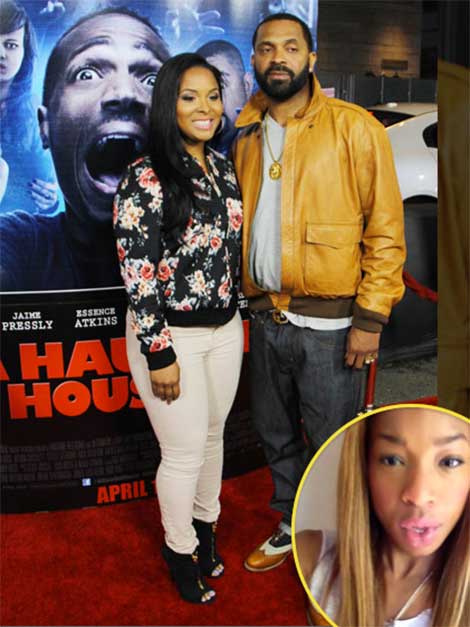 Mike Epps is at the center of woman-beating allegations — said to be drawn up by the comedian’s ex-sidechick. Don’t believe me.. Just ask Mike’s wife, Mechelle Epps — who’s reported to have had “a very heated exchange of words” with suspected sidechick, Simone Shepard.

Sources say it all went down last night the “A Haunted House 2” after party. That’s where Simone insists “he [Epps] punched her dead in the face”, during her confrontation with wifey. She quickly called cops.. and they say “there was no sign of injury to Ms. Shepard’s face”.

“Epps was involved in an altercation at Lucky Strike in the downtown area of Los Angeles. Police officers say a woman named Simone Shepherd alleged she had a prior romantic relationship with Epps when she worked as his ghost writer. She wanted to confront him about something.

It turns out Mike Epps had his wife with him and things went left between the two women.

All parties agree that there was a very heated exchange of words between Shepherd and the comedian’s wife. When things looked to be escalating into a physical fight, Mike Epps stepped in and separated the ladies. Shepherd claims that as Epps separated her and his wife, he punched her dead in the face. Simone Shepherd called the cops and filed a police report.

Cops say they observed no sign of injury to Shepherd’s face. Mike Epps vehemently denies ever laying a hand on the woman, but Shepherd says she may not have been showing signs of injury at the scene, but when she went home her face swelled up.”