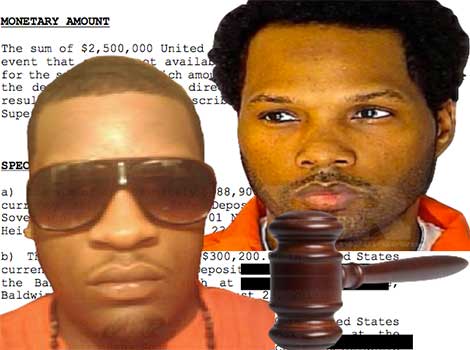 “Tyrus Harris had a minor role in the conspiracy, authorities allege.”

Exclusive Details – While Mendeecees Harris is said to currently be “free on a $600,000 bail package”… the LHHATL fallen star’s 36-year-old brother, Tyrus Harris, is set to begin serving a five-year sentence in the tank! Tyrus’ sentence stems from “his role in a drug conspiracy.” It’s now just a matter of time before Mendeecees — who pleaded guilty in March — learns if he’ll face the same fate. Know why? He’s got a date with a federal judge in October 2014.

According to court docs:

“Between in or about 2005 and in or about August 2012, the exact dates being unknown to the Grand Jury, in the Western District of New York, and elsewhere, the defendants…

MENDEECEES HARRIS a/k/a One a/k/a Uno, and TYRUS HARRIS a/k/a Sat, did knowingly, willfully and unlawfully combine, conspire and agree together and with others, known and unknown to the Grand Jury, to commit the following offenses…

Check out the millions in monies and assets listed as “seized on August 23, 2012”, according to court docs in connection the the federal case:

Articles of jewelry with a total appraised value of $406,950.00, including the following items seized: