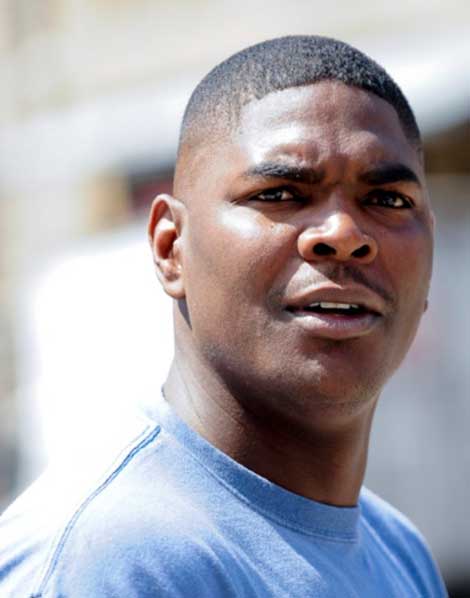 Another Pro-Athlete Bites The Dust…

Keyshawn Johnson is out on a $20K bond after sources reported the 41-year-old DWTS star was arrest on domestic violence charges, yesterday morning [April 21, 2013]. Reports reveal the former NFL’er had a nasty spat with an ex-girlfriend “that got physical.” According to Calabasas cops… “Johnson allegedly smashed his girlfriend’s phone and her hand somehow got in the way. Consequently, her hand reportedly received a nasty gash.”

HSK broke first word, back in Sept. 2013… exposing the former NFL’er for “keeping regular hookers on his payroll… who he smashes Raw Dawg!” Now, sources say.. “Johnson and his ex have verbally battled regularly throughout their relationship”.

“Deputies were called to Johnson’s Calabasas, California, home early Monday “regarding a possible spousal assault,” a sheriff’s statement said. “When deputies arrived, it was determined that the resident and his ex-girlfriend were involved in a domestic dispute,” the statement said. “The ensuing investigation resulted in the arrest of the resident for misdemeanor domestic battery.”