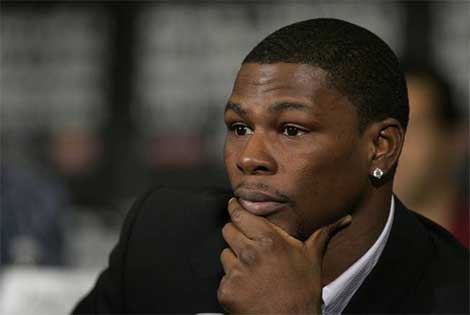 International Boxing Federation middleweight champion, Jermain Taylor, is spiraling out of control and either needs to be locked up or get psychiatric help, at once.

The 36-year old fighter was arrested on Monday, January 19, and charged with with five counts of aggravated assault, three counts of endangering the welfare of a minor, and possession of marijuana.

Taylor is accused of going nuts at a Martin Luther King Jr. Day parade in Little Rock, Arkansas after a child he let hold one of his title belts accidentally dropped it.

“He put the gun up against his temple, I jumped in front of it and it went off up into the air. He” injured my husband’s ear.
He was going to shoot him, but I saw it, he was going to kill him and I had to hit the gun.”