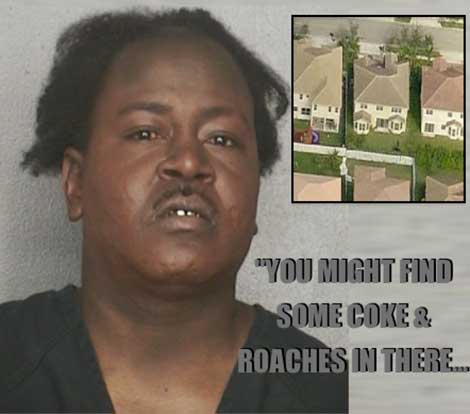 “He denied running a grow house, but admitted to deputies that they might find some cocaine and marijuana roaches in the home.”

That’s reported to be the spot where cops arrested the rapper, Wednesday (April 2, 2014). Records reveal Trick Daddy (a convicted felon, forbidden from having firearms and ammo) was busted “as he pulled out of the driveway”. He was booked on two counts of possession of firearm by a felon, possession of cocaine and driving with a suspended license… and released on a $6,100.00 bond, Thursday morning.

“Broward County Sheriff’s deputies were staking out the place on suspicion Trick Daddy was running a serious drug operation there. Records show they’d obtained a warrant for drug dogs to sniff out his property.

Deputies tossed the house. They reported finding 1 gram of coke in the nightstand, a 9mm Sig Sauer under the bed’s pillows and ammo in another bedroom.