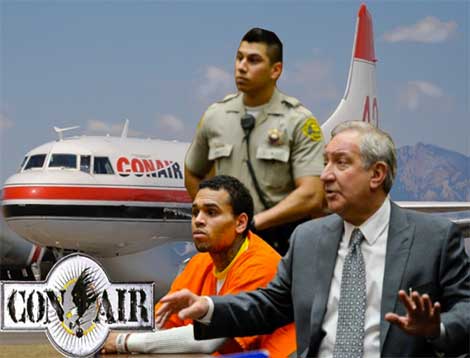 Chris Brown wrapped his 24th, as an inmate who was transported on ‘Con Air’, between L.A. and D.C. And now.. he’s gonna mark the beginning of his 25th year in the tank. A judge denied Breezy’s request for bail, during a Los Angeles court hearing, Thursday. His attorney, Mark Geragos, says he will be filing a motion to release — but the court won’t consider that motion until Breezy’s next court date, May 9th.

That would be just days after Chris’ birth date, May 5th. “Chris Brown must stay locked up in the Los Angeles County jail for at least another week while his lawyer negotiates with the prosecutor about his probation violation,” a judge said Thursday.

“U.S. Marshals, who took Brown from the Los Angeles County jail for extradition to Washington four weeks ago, handed him back to Los Angeles Sheriff’s deputies just hours before Thursday’s hearing.

Geragos and Assistant District Attorney Mary Murray agreed to hold talks over the next week concerning Brown possibly admitting that he violated his probation. If that happens, it will be announced at a hearing next Friday. Otherwise, the judge will set a date for a trial on his probation revocation.”

Here’s what Mark Geragos had to say:

“I think it’s a little over the top to have him in custody on this misdemeanor when everybody saw the bodyguard’s trial and which was nothing more than a bloody nose.. And you have got the bodyguard who was convicted and who readily admitted he was the one who did the punching. So all of this is much ado about nothing.”