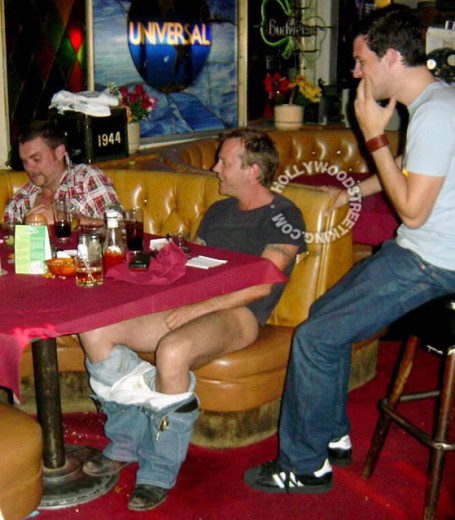 Kiefer is a drunk and did you know Kiefer is on a 5 year probation term for his 2nd DUI conviction?

Kiefer is a crazy dude did you know Kiefer loves strip clubs? I do. I was told the star of the television show 24  attended the strip club Crazy Girls, on Sunset and La Brea. It’s a dive don’t go.

Kiefer was a frequent visitor of this club back in the day when the club was a hit but now it’s shit.

What’s crazier is that Kiefer allegedly liked to stick around after the club was closed. Kiefer was said to be well drunk by this point of course.

I was told this dude will go on the stage and swing on the stripper pole and say to the remaining staff at Crazy Girls, ” They don’t know I’m a girl “.

Kiefer is f*cking nuts. Does his dad Donald know? If you don’t believe me ask Gino, he was the manager at the time. Now you can find him at Seventh Veil.

Goggle it if you wanna pay a visit.

The above photo was NOT Photoshopped!