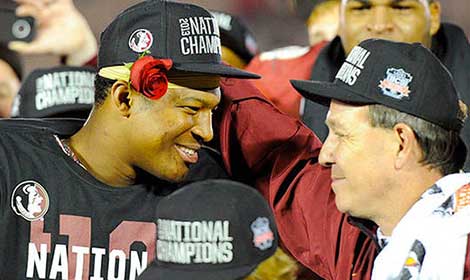 Florida State’s star quarterback – who’s widely believed to have gotten away with rape – is at back at the center a case. Reports reveal.. ‘Famous Jameis’ Winston was busted for stealing “$32.73 worth of crab legs and crawfish.” Now.. the 20-year-old Heisman Trophy-winner seems to be getting nothing more than a slap on the wrist.

“The facts are not in dispute. He left without paying. He indicated to deputies he had forgotten and when he got home he realized that he had not paid.”

Back in December, Winston was cleared in the alleged rape of a female FSU student. Just ask State Attorney Willie Meggs. He’s the very D.A. who filed the sexual assault case for the state… only to later tell the court “there was not enough evidence of crime to win a conviction.” That was one month after “Winston was questioned [in November] about his involvement in a long-running BB gun battle, and that a Burger King reported Winston was stealing soda in a ketchup cup.” Despite his FLORIDA track record, Winston was “cited” and granted access to “pre-arrest program.”

“Tallahassee Police say that it is being classified as a citation, and not an arrest. The civil citation will require Winston to complete at least 20 hours of community service. “

“The civil citation is a pre-arrest diversion in an effort to keep people out of the criminal justice system.

The program, instituted within the past year, is for nonviolent, minor crimes and first-time offenses for people without a criminal history.

The Leon County Sheriff’s Office instituted the program within the past year. Since December, 32 citations have been issued.”

Here’s what the Florida football star had to say:

“I’m taking full responsibility. In a moment of youthful ignorance, I walked out of the store without paying for one of my items.

I realize that I am in the public spotlight and my conduct needs to be above reproach. Over the last year I’ve learned that my accomplishments on the fields can be a wonderful thing for my school, teammates, friends and family. At the same time, I must realize that my mistakes are magnified and can bring great embarrassment to all those who support me every day.