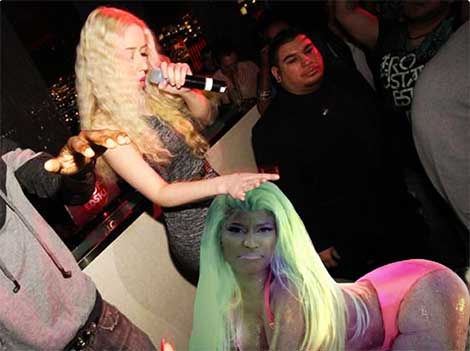 She says “the media puts words in my mouth”, but there’s no denying the shade Nicki Minaj threw at Iggy Azalea during her acceptance speech for Young Money’s ‘Best Group’ BET Award.

You’ll recall Black Barbie said, “What I want the world to know about Nicki Minaj is that when you hear Nicki Minaj spit, Nicki Minah wrote it… in an obvious jab on T.I.’s Great White Hope. Now, Nicki’s pulling the ‘Female Unity’ card, claiming her statement was supposed to enlighten “up and coming females” to write their own lyrics.

“I will always take a stance on women writing b/c I believe in us! I believe we’re smart enough to write down our own thoughts and perspective, just like the men do. I’ve been saying this for 5 YEARS. I fell in love with Lauryn Hill b/c I knew she was the author behind those amazingly profound and articulated songs on the Miseducation. I wondered how Lauryn tapped into my brain and wrote an album on love, betrayal, passion, pain, triumph, brokenness…. Did she read minds? It’s the same reason I have a different level of respect for Missy. I know she’s a writer and a producer.

Women MUST aspire for more. I’ve congratulated Iggy on the success of Fancy, publicly. She should be very proud of that. All the women nominated should b proud. That will never change my desire to motivate women to write. Our voices have to be heard. I hope I inspire up & coming females to do that.”