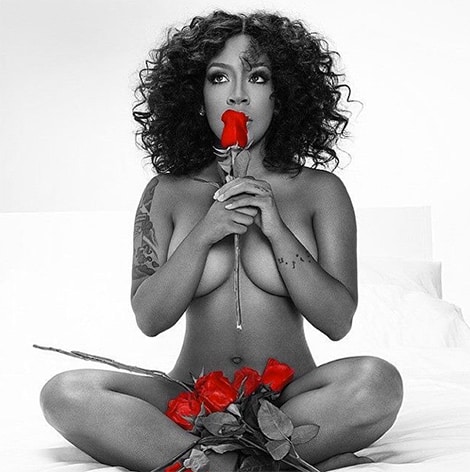 HSK Exclusive – K. Michelle has a groupie named Rashad, claiming that the Love ‘Em’ All lyricist mid-section smells like fish and chips.

A Washington D.C. man is saying he recently had a one night stand with the singer/reality star and ended up disappointed.

Here’s what Rashad posted on the internet about K. Michelle:

“I attended the opening of club Bliss in D.C. the other night only because I wanted to see if K. Michelle, ass was as big in person as it looked on television. When I got in the club it was late and she was already in the VIP section with her crew.

She stood up to make an announcement and I move through crowd to get to her and I had a rose in my hand and I raised it in the air. She was talking about safe sex and paychecks. She noticed me and I said “Hi my sweet.”

She took the rose and told her security guard to let me in her section. Once as I got in VIP she asked me “What’s my name?” I replied “Rashad” she didn’t say anything else before she was about leave the club and asked “If I had a girl to get home to?” I told her I was single, but I wanted to taste her p*ssy.

She looked at me shocked but smile and gave me her phone number and told me “Call me in an hour.” Security escorted her out the club. An hour later I called her and she told me which hotel she was staying at. I drove over expecting to just f*ck but what I got was something I’d never imagine.

I knocked on her room door and she yelled “Come in” there was music playing but I smelled the aroma of fish. I thought she was eating but she walked out the bathroom in a robe. I walked over and smiled and she gave me a hug and I untied her robe. My eyes got big as I saw her t*tties. They were big and hard.

Her stomach looked like a Kangaroo pouch but I didn’t mind. I could’ve been worse. It was that ass I interested in. It was big and soft although her legs were knock kneed and small. She was built like a centaur but I was all good. Because I was about to get my nut.

She asked me if I had a condom? I replied “Yes” and I asked if I could eat her p*ssy? she said “Yes.” I wanted her to ride my face. So, I picked her up but I immediately put her back down. Her p*ssy smelled so strong! P*ssy smelled like fish and chips! She asked me “What’s wrong?” I replied “Let’s f*ck.”

Yeah! I hit it even though it was stank. We f*cked for about 20 minutes and I busted on her ass. She told me she comes to town often and told me to hit her up. I blocked her number when I got to my car.

I could see why she can’t keep a man!”