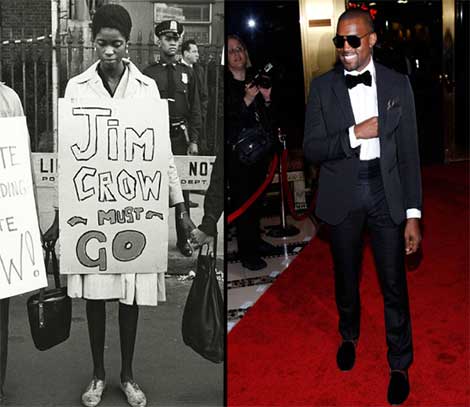 Here comes Kanye playing the victim… of his own celebrity.

Instead of lending his ‘star status’ to a good cause — like maybe joining the mission aimed at stopping the senseless violence in his very own hometown of Chicago — Yeezus says he’s chosen to “fight to raise the respect level for celebrities.”

Check out what Mr. AmeriKKKan Idol had to say during his wedding speech:

“What I talked about in it was the idea of celebrity, and celebrities being treated like blacks were in the ’60s, having no rights, and the fact that people can slander your name. I said that in the toast. And I had to say this in a position where I, from the art world, am marrying Kim. And how we’re going to fight to raise the respect level for celebrities so that my daughter can live a more normal life. She didn’t choose to be a celebrity. But she is. So I’m going to fight to make sure she has a better life.

I’m sitting right here, it’s a fight. I’m fighting with the way I line my words up together and the way I place a sweater on top of a T-shirt. At this point, people know what’s up. People know I’m smart. And people know that, whether it’s SNL or Jimmy Kimmel, it’s a trend to take the piss out of celebrity — just as much of a trend as wearing a gray hoodie or driving a Prius.”