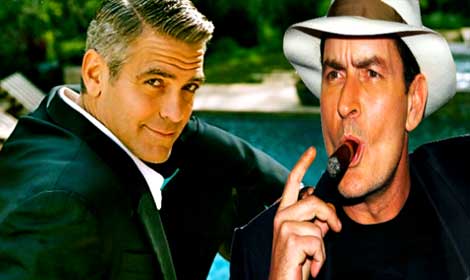 HSK Exclusive – Watch out now!!! Charlie Sheen’s about to break out those “fire-breathing fists” and draw some tiger blood! Know why? We’re told the actor is furious over Warner Bros’ favored treatment of Clooney over himself!

“Warner Bros gives George Clooney the corporate private jet to travel anywhere he wants. They refuse to let Charlie Sheen use it.”

“Charlie believes Warner Bros kisses George Clooney’s ass. He’s is pissed at Warner Bros because they won’t give him the company’s private jet for him and his friends to fly to Las Vegas to party.

No one at Warner Bros likes Charlie Sheen, and Charlie knows it.”