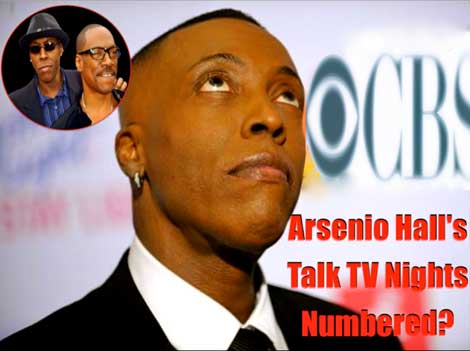 “Word is CBS is thinking about looking for another host to replace Aresnio.”

HSK Exclusive – Dropped ratings and an axed EP is said to have led to serious tension on the set of ‘The Arsenio Hall Show.’ But that could be the least of Arsenio’s problems. Know why? Word from the industry reveals the network could be getting ready to cancel the show!

This news comes just a few days shy of the two-month mark since Arsenio’s comeback to late night talk TV. That’s why we’re told Arsenio’s pulling out the big guns in hopes of securing his gig.

“He’s scrambling to get his ratings back up — so he begged Eddie Murphy to make a guest appearance. Eddie’s scheduled to show-up on the set November 19th.”

“Arsenio came back strong but his ratings dropped with the quickness.

He’s still acting like it’s the ’90s and his formula is not working. The executive producer was recently fired and ‘The Arsenio Hall’ crew is nervous, believing the show is about to be cancelled.”