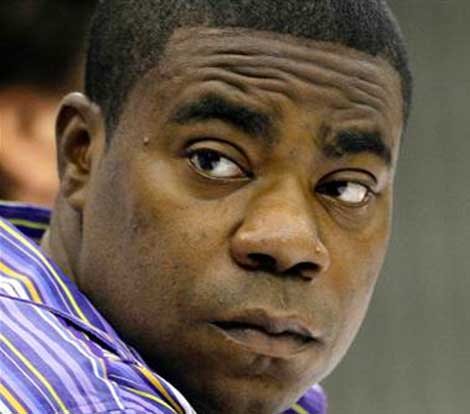 “While he is continuing to show signs of improvement, he still has a long way to go.” –Lewis Kay

Tracy Morgan has been released from a New Brunswick, N.J., hospital, two-weeks after being critically injured in a horrific crash on the New Jersey Turnpike. This marks the next step in recovery for the 45-year-old comedian, who has been moved to an undisclosed rehabilitation center. That’s where he is expected to remain for the next few weeks, according to Morgan’s publicist, Lewis Kay.

“He [Tracy Morgan] and his wife Megan wanted to publicly express their deepest gratitude to everyone at Robert Wood Johnson University Hospital for the unbelievable care and attention they provided him.”

“Morgan was critically injured in a limo bus crash on the New Jersey Turnpike int he early morning hours of June 7.

Morgan suffered broken ribs, a broken nose, and a broken leg. Morgan friend and fellow comedian James McNair was killed in the crash.

The semi-truck that rear-ended Morgan’s limo was traveling 20 mph over the speed limit and its driver was almost at his drive time limit. That is the finding in a preliminary report by the National Transportation Safety Administration released Thursday.

Police said in a criminal complaint driver Kevin Roper had been awake for more than 24 hours at the time of the crash. The 35-year-old Roper has pleaded not guilty to charges that include vehicular homicide and assault by auto. Roper is free on a $50,000 bond.”