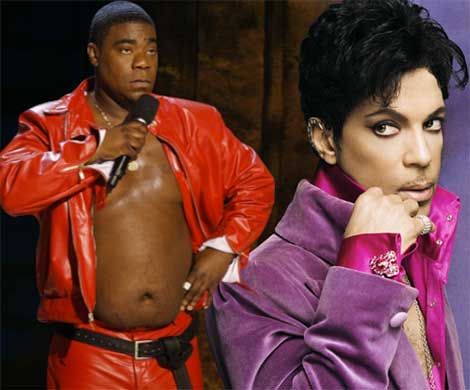 “Prince is pretty, he’s just purrrdy! He got that little mole right there.. and my tongue came out a little bit.”

Tracy Morgan recently recalled the time he says Prince kicked him out of the Purple Kingdom. But even Arsenio may agree that Tracy — alter ego or not — seems to have refrained from giving up all that went down before Prince gave him the boot! Know why? Because Tracy Morgan aka ‘Chico Divine’ appears to like Prince for much more than just his music!

Here’s how Tracy Morgan broke it down to Arsenio Hall:

“I got kicked out of Prince’s House…

I was my alter ego, Chico Divine. People love Chico Devine.. but when he drink a little bit he was crazy.

But as I walked out the door I walked past Prince. He was standing in the doorway with his wife, they had on purple pajamas.. and I pulled his face close to mines, and I said, ‘my father loved ‘When Doves Cry.’

And Prince is pretty! He’s puuurdy! He got the little mole right there.. my tongue can out a little bit.”