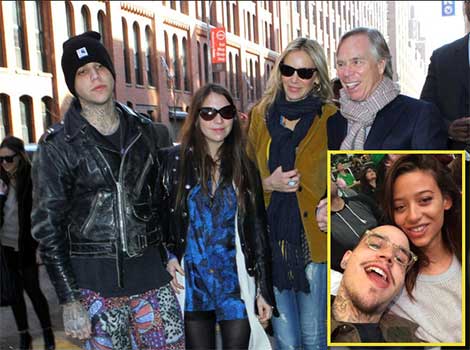 “Basically, they didn’t want a Black baby in the family.”

HSK Exclusive – The son of Tommy Hilfiger — 24-year-old Richard Hilfiger aka Rich Hill — is reported to have recently impregnated an unnamed 21-year-old mulatto woman. A source exclusively tells HSK the alleged pregnancy has since been terminated — supposedly under Hilfiger family orders. Know why? We’re told “they didn’t want a Black baby in the family!”

It could be ironic… or not… that this word comes just four-days after reports claim “Rich Hill has hooked up with Rita Ora.”
Though we can’t tell you much about the unnamed woman, she’s reported to be an ‘aspiring singer.’ We’re told the Hilfiger’s may have used their clout to “bribe” her… “promising to help her with her music career.”

“They used a fictitious name and paid cash. The aunt [allegedly Ginny Hilfiger] wanted to be in the room to make sure it was done.”

Did Tommy Hilfiger once say he would have never made his sports wear had he known that Blacks and Asians were gonna wear them? Of course! Ask Oprah.