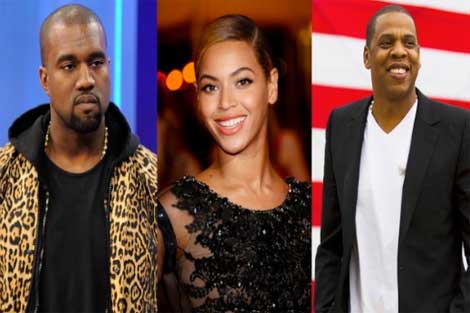 “Jay stabbed Kanye in the back.”

HSK Exclusive – A tipster exclusively tells HSK … Jay Z is behind door number one, as Yeezus and Beysus remain at odds. Know why? They say J-Hova didn’t only lead his Missus’ to beat Mr. Kardashian to the punch, by dropping her visual album first … The Carters’ ripped off the entire idea from Yeezus!!!

But Kanye’s visual album idea isn’t the only thing The Carters reportedly stole. Our whistle blower is spilling the real deal behind Jigga’s BNY collection of leather jogging pants and boxers, revealing Kanye as the man who originally envisioned the gear. We’re told those are the reasons why Ye pulled a no-show at Tina Knowles’ ‘Eyes Wide Shut’ 60th birthday bash in New Orleans.

“When Kanye wanted to drop ‘Dark Twisted Fantasies’ as a visual album, Jay and his camp told him the idea was wack. Jay stabbed Kanye in the back when he told Beyonce she’s look like a genius if she did a visual album.”

Did Kanye get the ‘visual album’ idea from another? Of course … Just ask Canibus.