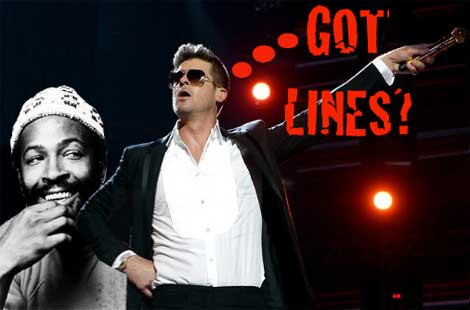 “It’s the latest twist in the complicated legal maneuvering over who’ll rake in the royalties.”

Sony/ATV Music Publishing has thrown in the white towel over their ‘Blurred Lines’ lawsuit. But just because Marvin Gaye’s family has ‘reached a settlement’ with the Sony Corp./Estate of MJ company — over the straight ripoff of Gaye’s “Got To Give It Up” — that doesn’t mean Robin Thicke’s about to give up his fight.

“Robin Thicke was the first to bring litigation and sought declaratory relief that his mega-hit song wasn’t an improper copy.”

“Now, comes a settlement agreement between Gaye’s family and the music publisher. Terms haven’t been made public.

The agreement means that Sony/ATV won’t have to defend their impartiality in administering copyrights to both Thicke’s work and Gaye’s. It will also release the company from having to address what was said to have been a conflict inherent in owning 30 percent of the music publishing market.

However, it won’t completely finish the involvement of Sony/ATV in the lingering dispute between Thicke and Gaye’s children. As discovery is pursued, and as the case pushes its way to a potential trial, Thicke’s camp will likely want a jury to hear exactly why Sony concluded the songs were not substantially similar.”