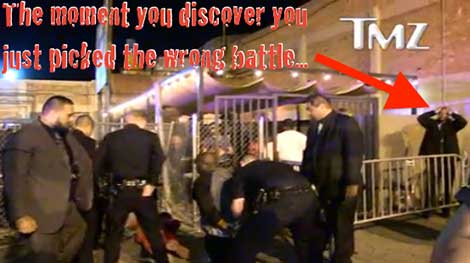 EXCLUSIVE DETAILS: The streets of LA are buzzing with word of the violent beat-down that went down behind Hollywood’s Supperclub, last night. TMZ reported an assumption, publishing, “…the security team pummeled the club rejects into bloody messes.”

HSK confirms those supposed “club rejects” to be anything but! Know why? They are some of LA’s most respected on these streets! Don’t believe me.. Just ask Game.

“The two men who were beat up were taken to the Hollywood division of the LAPD. However, nobody wanted to press charges so the pair walked.”

Before the brawl, our source tells us “it was poppin'” inside Supperclub — where Future’s album release party was underway. That’s before front door security is said to have profiled the men, now revealed as special guests to Future’s event. Sources say, “The denied party was obviously upset and started arguing with the security team.” **SideNote: Profiling Black men has turned to a regular practice at Hollywood nightclubs**

“Game and T.I. were hanging out at The Supper Club when a few of their “mutual associates” were denied entry.”

Here’s what T.I. exclaimed when he and Game discovered the cops weren’t to blame:

“When the owners found out who their bouncers had beat-up, they fired all of them with the quickness. If I were you, I’d keep clear of Supperclub. Ask T.I.”