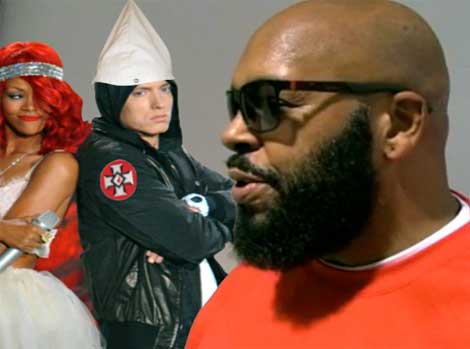 HSK Exclusive – Some people may have forgotten Eminem’s track boasting lyrics that don’t only straight disrespect Black Women, but also mock the entire Black Pride Movement … But Suge Knight has not!

“He [Eminem] did a song saying all Black women is n*gga b!tches, and they gold diggers and they stink.” ~Suge Knight

The racist recording ‘Foolish Pride’ was born in a Detroit basement, back in the late 80’s … before Marshall ‘Eminem’ Mathers became large. It’s lyrical content is nothing less than repulsive. Now that Eminem has retained Rihanna as his sidekick for his ‘Monster’ comeback, Suge’s making it a point to rightfully check dude!

Here’s what Suge Knight had to say about Eminem & the N-word:

“Eminem’s a White boy, and he did a song saying all Black women is n*gga b!tches, and they gold diggers, and they stink. So when he could say a song like that … and you got guys that are so scared to say something about it … don’t start sayin’ something now, because if you’re gonna be one way be one way with everybody, or be one way with nobody.

I mean my whole thing about the word is this … if somebody is using the word n*gga, and they hangin’ around n*ggas, and sayin’ it around n*ggas, that’s one thing. But, I still don’t feel some people can say it to me.”

Check out what Emimem had to say about Beautiful Black Women in ‘Foolish Pride’:

Don’t date a Black girl, take it as a diss
If you want, but if you don’t
I’ma tell you like this, I surely won’t
Never date a Black girl because Blacks only want your money
And that shit aint funny

Don’t date a Black girl, if you do it once you won’t do it twice
You won’t ever do it again because they’ll take your money
And that aint funny
So I’ma say look honey
I thought I said that before
But like I said again you’re nothing but a big whore

I’ll get straight to the point
Black girls are bitches, that’s why I’ma tell ya you better pull up your britches
‘Cause all that cash is making your ass drag
From the boyfriend ya ganked and that’s pretty bad
I mean that’s pretty sad when ya dating a Black guy
And then you turn around and f*ck another big, Black guy
Now that’s pretty wrong, but you’re just ganking
But that’s okay because you need a goddamn spanking
From me, the funky Eminem 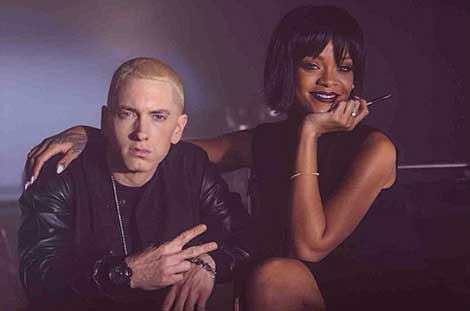