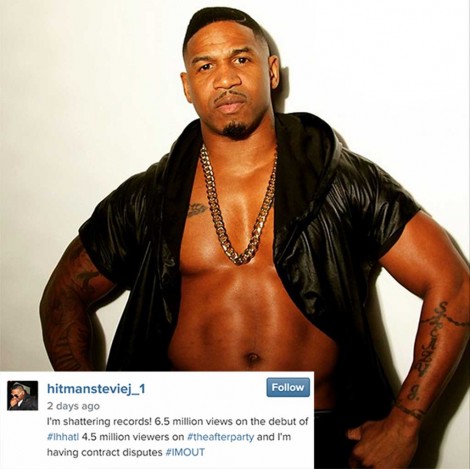 HSK Exclusive Could Stevie J be finally facing the fact that his 15-minutes of fame may be up?

One thing’s for sure, he’s sure seems to be fighting to keep himself off the “non-muthaf*ckin-factor” D-list. Why else do you think Stevie took to IG and Twitter to “cry wolf”? Sources say Stevie’s recent Twitter and IG bombs “ain’t nothin’ but gas and social media blasts.”

Steve J posted this to IG:

“I’m shattering records! 6.5 million views on debut of #lhhatl 4.5 million viewers on # the after party and I’m having contract problems # IM OUT”

A source close to Mona Scott-Young tells HSK that Stevie J signed off “months ago” on an agreement which pegs his pay for this season at $125K with a $15K bonus. We’re told Stevie is looking to land a spin-off, and is said to be betting that his social media ruckus will “show Mona Scott Young he’s worthy of his own show.”

“Stevie doesn’t have contract problems. He’s saying that sh*t for publicity. He’s Mona’s highest paid *** AND he’s got the power to do whatever he wants on the show. Stevie wants more money so he’s campaigning hard to get his own spin-off.”