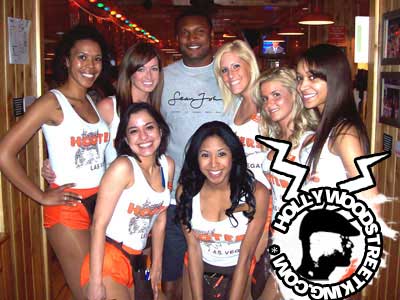 Steve McNair has been murdered by a 20yr old woman named Sahel Kazemi. The courts won’t be able to prosecute her as she committed suicide after she killed the beloved quarterback of the Tennessee Titans. Did you know Steven was a married man with 4 sons? I didn’t…

What was Steven doing with this 20yr old waitress that worked at Dave & Buster’s? Apparently Steve met Sahel at this restaurant while he was dining with his wife and kids; uh oh. Everyone who worked at the restaurant knew all about Sahel and Steve’s affair. It was made even more publically obviously later when Sahel got a D.U.I while driving a 2007 Escalade that was registered under Steve’s name. Can I ask a question? What’s with football players and waitresses? Didn’t O.J. meet Nicole Brown Simpson when she was a waitress too?

Why did Sahel Kazemi shoot Steve McNair? Maybe ‘cuz Steve lied to her…? Is it that simple? Sahel is a waitress with big dreams, when a trick came along promising her a future just to get into her panties she took it. Steve told Sahel he was going to leave his wife for her… of course the 20yr old waitress believed it. Sahel will probably believe anything from a fly guy with money; she 20yrs old for Christ’s sake… I don’t wanna shit on the guy being that he’s deceased and all…but Steve was not too bright… Steve was found shot 7 times by his friend and f*ck-pad roommate. The murder weapon was also found beside Sahel…she was apparently dead of one self-inflicted gun shot wound…poor kid.

We’ll have to wait for the fuzz to conduct a full investigation to know the whole truth but Sahel’s credibility might dissapear when you hear this: Sahel had a pimp. The mack’s name is Keith Norfleet. Who do think is telling everybody the story?