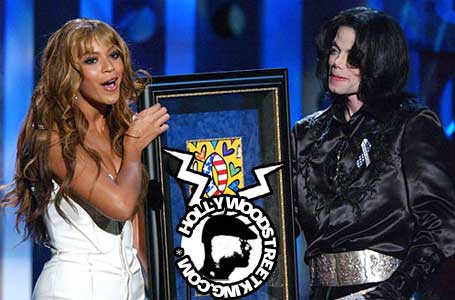 P.Diddy was on David Letterman and said Michael Jackson once came over to him and while whispering in his ear; asked Puff where Beyonce was. Word is that the King of Pop and the Queen of Weave a.k.a. Beyonce were dancing all night long on the floor…Do I believe Diddy? Yes. Know why? ‘Cuz Beyonce is a f*cking fan mane! If Lenny Kravitz wanted some he could too. Beyonce said it, I didn’t.

Apparently it seems like Jay Z’s wife has a thing for pretty boys and guess what? Jay Z is not too cute is he? Jay Z is like Shabba Ranks – talented but very ugly. Since Beyonce is a fan of Michel Jackson you must trust me on this one…Know why? Cuz I f*cking know mane. That’s why. This song stealing, weave wearing, booty butt pad chic Beyonce probably had a taste of the King…She grew up fantasizing about the King all her life plus Beyonce is a Virgo. Did you know Caligula was a Virgo? Most females born under this sign are very promiscuous- they’re all whores aren’t they?

Hey Jay Z: You called The Game a fan but your wife is secretly one of the biggest groupies in the business. Don’t believe me ask Kelly Rowland. For those of you that are unfamiliar with classic movies, there’s a character from the movie The Planet Of The Apes; General Aldo, who strikes a shocking resemblance to Jay Z. People keep wondering how Beyonce does it? I tell them all just listen to the O’Jays ” Money Money Money Money”…