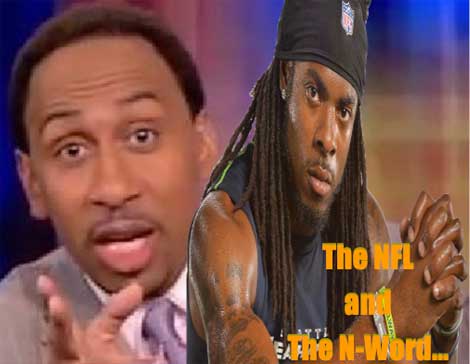 “It really has to do a lot with who it’s coming from, that’s really the prevalent the issue here…”

Stephen A. Smith isn’t only showing “1000-percent” of his support for Richard Sherman, after the Seahawk checked the NFL for its proposed plan to ban “use of the N-word on the field” — Brother Stephen has broken down why he’s ‘completely and totally appalled’ by the league’s mere mention of a plot he explains, “focus on Black individuals choosing to use that word.”

“Who, outside the Black community, doesn’t know that it’s not a word that you need to be uttering to Black folks — or in the company of Black folks? Let’s keep it real here, that’s what Richard Sherman is saying. Lets eradicate all offense language and call it a day.” ~Stephen A. Smith

Stephen Smith’s N-Word 101 session with ESPN comes on the heels of Sherman’s response to news that the NFL will be “potentially enacting the rule that would penalize a player 15 yards for use of N-word on field.”

Here’s what Stephen A. Smith had to say about it:

“It’s important for us to recognize what he’s saying here. He’s not saying that we should be allowed to go out there and spew the N-word. He, myself and others who have used the word on many occasions in the past — it’s something that we needed to stop — the John Woo’s of the world, associated with the Fritz Pollard lines — is absolutely correct in proposing the eradication of the word all together… any way we can.

But it’s one thing to push for that. It’s another thing to ask any system itself, any foundation, any structure — where its run by white folks in order to invoke such a policy.

Think about it this way… the word itself is highly offensive and heinous in the English vernacular to a lot of people, particularly within the Black community. It really has to do a lot with who it’s coming from, that’s really the prevalent the issue here.

So if you’re talking about people who were maimed, hung, murdered, and all of these different things — and that word was associated with it… then you’re going to sit there and say that those very people get to come to Black folks now — who communicate off the airwaves, in the privacy of their own company — and try to talk about how they should communicate with one another? That’s a big problem. That’s the kind of stuff that Richard Sherman is eluding to because he’s saying, ‘Wait a minute, fall back folks! Who do you think you are to involve yourself in this kind of situation?’

And as wrong as it may be to utter those words — and I’ve certainly been guilty of it in the past — the reality of the situation is…outside of the working condition itself, it should have nothing to do with anybody else…

To focus on the N-word itself is to focus on Black individuals choosing to use that word, by and large, among themselves…

How dare anybody outside of the Black community believe that they have any right whatsoever to ingratiate themselves in that kind of situation.”