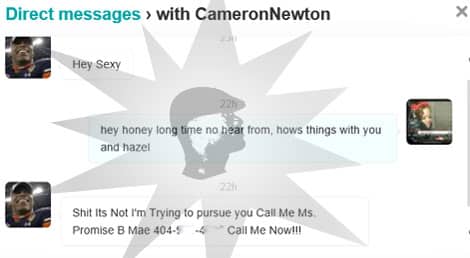 The 24-year-old NFL quarterback recently used Twitter to hook-up with a Sacramento women, supplying ‘Promise B Mae’ with his phone number — while denying his relationship with his reported soon-to-be wife.

“After he sent the DM on Twitter he later unfollowed her on Twitter, trying to be slick. I swear guys are so lame.”

“Cam is a cheating ass dude. He cheated on Natalian and he’s now cheating on Hazel. Once a cheater, always a cheater.”