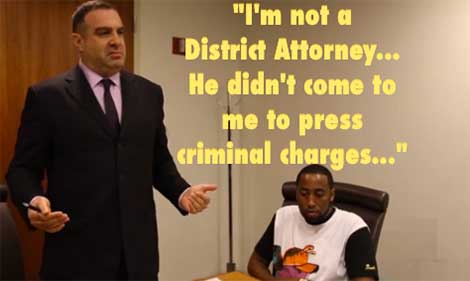 He may be taking legal action over the Summer Jam beat-down he suffered — allegedly served up by Fiddy and members of his G-Unit clique — but Slowbucks’ lawyer has set the record straight… letting it be known that Slowbucks is no snitch. In fact, we’re not sure trademark attorney John P. Bostany would even consider repp’in Slowbucks if he were a snitch!

To get the full just of what we’re talking about, you gotta check out the video footage of the pre-suit press conference Bostany held… with a tight-lipped Slowbucks present.

“This isn’t about beating up someone in a dark alley, that’s easy to do. This is about trying to hurt the man’s brand.” -John P. Bostany

Check some of the transcript of Bostany’s very vague briefing:

“The parties that we are going to take legal action against are still under investigation… monetary damages will be determined in the future.

The steps that were taken on Sunday, by competitors, was meant to hurt the brand. I’m a trademark attorney, I repair brands when they are damaged by other competitors…

[Slowbucks] was jumped by a bunch of guys that had one thing in mind… to try to hurt his brand so he doesn’t skyrocket on his way to be a seller of clothing like Roc-a-Fella or Sean John.

Slowbucks is a businessman. If he was a thug he might of done something else. I mean… I’m from Brooklyn. There are guys that are in my neighborhood that might have picked up a baseball bat, because they’re not businessmen.

There’s many causes of action we’re investigating. Assault is easy… obviously​, we all saw that occur. Conversion is one… there’s theft, they took the man’s chain… there are other more brand-oriented causes of action… unfair competition, tarnishment… you have a guy that has a business and that business is being damaged.”