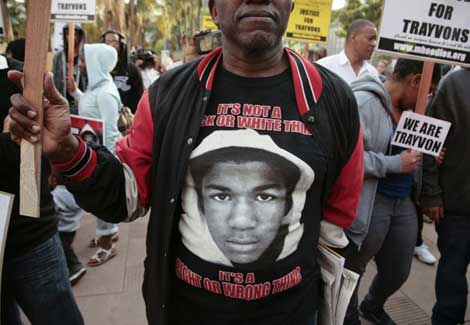 George Zimmerman’s planned day of sun, surf and sand on South Beach — with his girlfriend, her kid and his brother — got real on his AZZ. Know why? Sources say that’s when Trayvon’s acquitted killer learned of the bounty on his head.

“It freaked him out and they all retreated to the hotel, but the crowd followed them.”

“Security swept their room to make sure no one tampered with their stuff and then stood guard throughout the day and night. We’re told Zimmerman did his CNN interview early the next morning and then beat it … literally fleeing Miami.”

“It is a very troubling time in the United States Of America. We are in the era of so-called ‘post racial harmony’ with all people but Black people who are being murdered all over America and we get the same treatment time and time again.

So we’re saying to President Obama, ‘You gotta do your job on this one, buddy.’ Our children are dying. And so, White America, we have given you 400-years to get it right and you still have failed Black people — we’re not even citizens in this country. We’re still third-class citizens.

And so today, as Black men, we must stand up in America. We must declare to White America, ‘time is up for you. No longer can you kill Black children and get away with it.”