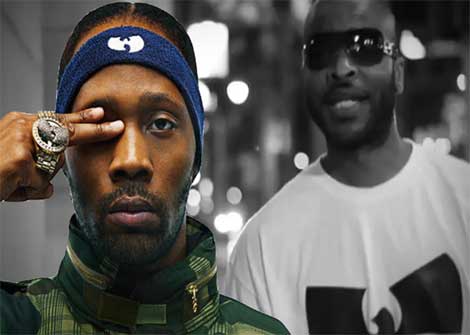 Rza is being revealed as the person who first made the gruesome discovery of Andre ‘Christ Bearer’ Johnson, who reportedly remains in “serious condition” today. This, more than 24-hours after Johnson reportedly, “severed his penis and jumped off his second-story balcony apartment building in an apparent suicide attempt.”

Sources say the NorthStar rapper’s “penis had been located and transported to hospital, where doctors determined they would be unable to “reattached the penis”.

Cops say.. Johnson was found on the sidewalk outside of his North Hollywood apartment building, around 1AM Wednesday morning. That’s just one day after ‘Christ Bearer’ released his music video “OOOH!”, on Tuesday. It now turns out… Rza was the first to find Johnson, who insists Johnson “wasn’t on any hard drugs.”

“Christ Bearer was discovered by the Wu-Tang Clan producer RZA in 1998, as a member of the group Northstar.”

Here’s the last thing he tweeted:

“Mr Johnson survived the fall from the second story of a building in North Hollywood, but has sustained serious injuries, He is currently recovering in Cedars-Sinai Medical Center, where he is being treated. His penis was retrieved. It is not yet clear what caused Mr Johnson to jump from the building.”