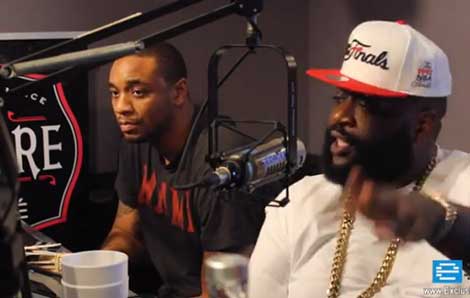 “There was supposed have been a mob gang… and that’s totally false.”

Rapper Rick Ross’ explanation for why he skipped performing at Detroit’s Summer Jamz concert couldn’t be further away from the promoter’s word. While Rozay sticks to his story of it being a ‘peaceful protest’… the promoter’s previous statement places 150 goons on the scene — who “threatened to harm Ross if he entered the grounds.” One thing’s for sure… somebody’s not telling the truth.

“A decision was made from Mr. Ross’ team the conditions were becoming threatening and posed a security risk.”

Here’s what Rozay had to say to Miami’s 99 Jamz:

“We went over to the gig and my team is always in front of me. Just to make it clear, I never made it over to the venue.

You know, for my team that made it… “

Q: There before you?

“Right… they didn’t even know there was a problem. That’s the promoter’s job, you know what I mean?”

Q: To guarantee that it’s a safe situation?

“Right… so the promoter himself said, ‘Let’s get it fixed.’ So we said, ‘Let’s go to the casino.’ Shout out to Greektown Casino. So we went back to the casino. And, you know, that’s where we chilled. And that’s when I got the story that there was supposed have been a mob gang… and that’s totally false. And I let that breathe for a whole day just for somebody to step up and say that’s not true. No one spoke to MMG, no one.”

Q: So what happens now? Do you go back to Detroit? ‘Cause your fans out there, they wanna see you…

“I mean… I mean… I mean… for me personally, it ain’t personal… because I was paid… and I was paid well. I just feel bad for those kids that stood out there for six-hours that wanted to see Ricky Rozay and couldn’t see the boss because someone padlocked the gate. So for whatever reason they did this, I don’t understand it. Because it’s somebody supposed to be from the jungle. In the jungle, you don’t lock the lions out — you let the lions in and lock ’em in. That’s when you get the confrontation you want, if that’s what you want…”