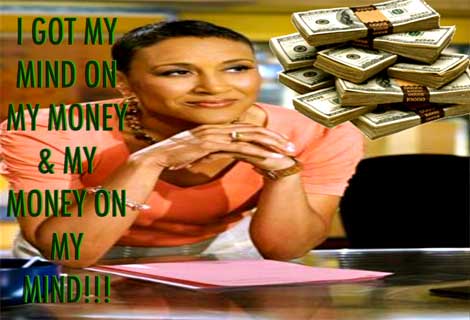 Robin Roberts could have a big problem with bringing in more ratings than Matt Lauer — while making a small percentage of the ‘Today’ show anchor’s $25M dollar annual salary.

This news comes as reports reveal ‘Good Morning America’ is about to renew its talent’s contracts, and a source reveals Robin’s grueling schedule could compromise her recently recovered health.

“Certainly, everyone will be offered raises given the show’s success. But if they give Robin $12 million or more, they can’t low-ball the others.”

“Since ABC’s ‘GMA’ has reigned as the top morning program since September 2012, friends think Robin – who’s negotiating a new contract – should be compensated accordingly. While a friend says Robin is feeling close to 100 percent and resumed working on ‘GMA’ five days a week in September, her long-term health may play a key role in contract negotiations.”

“She realizes that she won’t score the sweetheart deal Matt got, but she still should be paid at least double her current salary. Robin is loved and highly valued by her bosses, but a slew of contracts are coming up for renewal on ‘GMA.’

Besides Robin, the network is negotiating with Lara and Josh. And George Stephanopoulos’ contract will expire a year from now.

Robin is modest, but she knows she deserves more money. Certainly,
there’s no way Matt Lauer should be paid quadruple when she and ‘GMA’ have more viewers.”