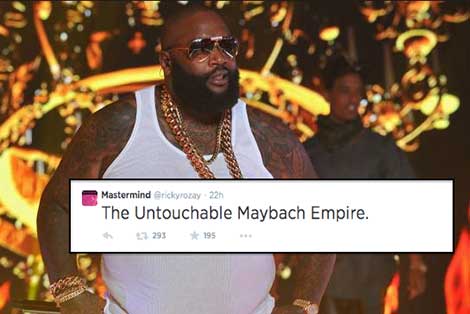 “A decision was made from Mr. Ross’ team the conditions were becoming threatening and posed a security risk.”

William ‘Rick Ross’ Roberts would have you believe “a peace protest wit picket signs and locked gates” kept him away from taking to Detroit’s Summer Jamz stage, on Saturday. Turns out… that’s far from the real deal. Don’t believe me… Just ask the promoter behind the Chene Park event.

“Between 100-150 individuals lead by a local rapper, prevented and threatened to harm Ross if he entered the grounds to perform at Chene Park Amphitheater.”

Here’s the statement released by the president and CEO of Right Productions:

“The band of individuals orchestrated a human blockade around the service entrance to the venue – preventing Mr. Ross and his entourage from entering the premises.

A decision was made from Mr. Ross’ team the conditions were becoming threatening and posed a security risk. We want to extent our deepest regrets to our patrons who attended Summer Jamz17 who should have been treated to an outstanding performance from Rick Ross.

We have the upmost respect for our guests at Chene Park and they deserve better. This is the fifth Summer Jamz event we have hosted with our partner Radio One and Host 107.5 FM – and until this point with no incident.

Acts of intimidation, bullying, threats or violence of any kind that compromises the security and enjoyment of our shows will not be tolerated at Chene Park.

I will be reviewing this matter with our collective team and sponsoring host to ensure the integrity and respect we hold for our patrons and artists is upheld for future acts performing at Chene Park Amphitheater.”