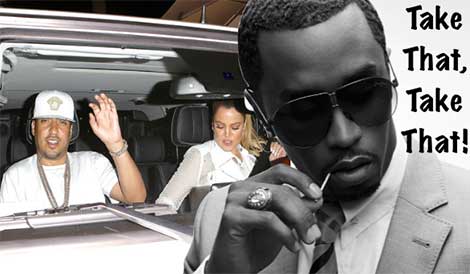 Rest Haven For A Rapper?

HSK Exclusive – Puffy is being named as the alleged connector responsible for fusing French Montana with Khloe Kardashian. According to our insider… Puff made the pairs’ introduction, “… because he was tired of paying French Montana’s bills.”

“Puff knew Khloe was lonely and that French could sweet talk his was into her bank account.“

The duo’s noted “proportionally-beneficial relations” may have since gone to the next level, reported to now have Khloe’s heart involved. According to our source, “It was joke for promotion… but the joke backfired when Khloe fell in love with French Montana.” But that may not mean French Montana feels the same. Know why? We’re told… “While Khloe was in Paris for Kanye and Kim’s wedding, French Montana was checking out big booty Black IG models.”

“French cheats on Khloe anytime he gets a chance, ask Lola Love.”

“French is freeloading off Khloe. He’s got less than 50K in the bank and he’s worked his way up to being a cast member on Khole and Kourtney Take the Hamptons.

Puffy’s planned worked and everybody in the industry is laughing at Khloe behind her back.”