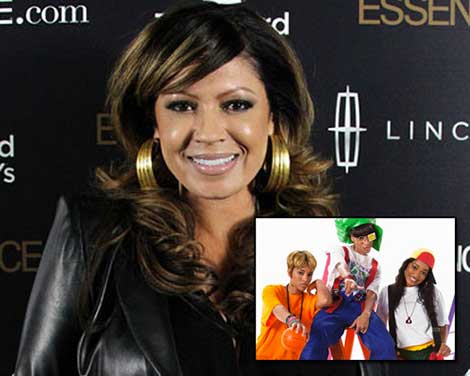 If Pebbles has her way, Viacom will be paying up $40M for green-lighting her portrayal as a shady swindler in TLC’s “CrazySexyCool” biopic. Sources reveal… Perri ‘Pebbles’ Reid filed the multi-million dollar defamation lawsuit in Atlanta federal court, Friday [April 25, 2014].

According to Pebbles’ suit against Viacom, the company: “Ignored fundamental canons of journalistic and literary conduct by publishing false and defamatory accusations with actual malice.” A spokesperson for Viacom would only say, “It’s our policy not to comment on matters in litigation.”

“Reid never controlled TLC’s lawyers or accountants, never withheld contract terms from TLC and always paid the group what they were owed.”

“Pebbles told an Atlanta federal court that the 2013 VH1 movie portrays her, “As a conniving and dishonest business woman who hoodwinked three innocent girls and exploited their talent for her own personal gain.”

After selling 11 million copies of their 1994 album “CrazySexyCool,” TLC filed for Chapter 11 bankruptcy protection. Record execs said TLC only filed in order to void their contracts, but the girls, who sued LaFace Records and Pebbitone, Reid’s management company, claimed they were paid only $50,000 a year each in 1993 and 1994.”

Peep how the late Lisa ‘Left Eye’ Lopes broke down TLC’s dollars and cents in “Behind The Music”:

“​This is how a group can sell 10-million records and go broke — get ready to do your math. There are 100 points on an album, TLC had seven. Every point is equal to 8-cents.. alright.. seven times eight, 56-cents.

When we first started out we were kinda cocky. But as time went on we learned that every time an album gets sold, TLC gets 56-cents.

So 10-million records… 5.6 million dollars. Seems like a lot of money.. well it’s not a lot of money when the record company has spent three-million dollars to record your album. And in the record business, we pay all costs back to the record company. We pay recording costs, we pay video costs… So now, we have $2.6 million dollars left. Well guess what? When you have that much money, you’re in about the 47, 48.9 tax bracket. So that immediately gets deducted to $1.3 million dollars. Then, you split the rest three-ways. You got about $300,000 a piece.. if that. $300,000 dollars.. I could buy a nice house with that, and what am I gonna pay my bills with?​”