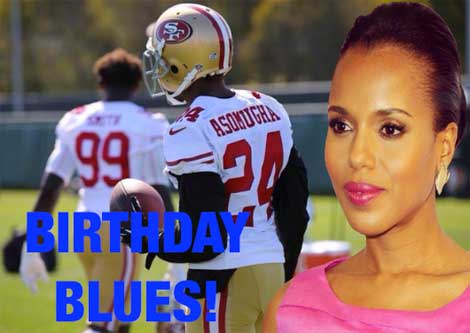 “What should be the happiest time in Kerry’s life has become a marital minefield.”

One would think your new wife’s first birthday since your wedding — not to mention her being eight-months pregnant with your child — would keep you from heading to the Superbowl with your homeys. Sources say that’s not how Nnamdi Asomugha saw it, reported to have left Kerry Washington all by her lonesome to celebrate her January 31st birthday weekend!

Now the couple, who’ve barely been married for just eight-months, are reported to be on the rocks. “Furthermore, a source says – who was dropped by the San Francisco 49ers – is beginning to feel over¬whelmed by Kerry’s success.”

Here’s what a source told The Enquirer:

“She was incredibly embarrassed when Nnamdi flew off to New York for the Super Bowl instead of sharing a romantic night to celebrate her birthday. She’s fears that he’s proving to be an unreliable husband, and she’s even more concerned about what kind of father he’ll make. They’re definitely growing apart.”