HSK Exclusive – Just days after HSK exclusively brought you a first look at the Nikki Mudarris sex tape, the Love & Hip Hop Hollywood reality star is pullin’ a Jamie Foxx. Know how? When it comes to being caught out there smashin’ … on a sex tape … Nikki says she blames it on the a-a-a-a-a-a-alcohol.

“I would never consent to doing such a thing and let it be open to the world to see, clearly I was intoxicated.” ~Nikki Mudarris

“She’s gonna do it. Nikki don’t need the money, but every pop star these days must have a sex tape.”

Here is the word Nikki put out there since the “leak” …

“I really wanted to ignore this but since everyone is asking I’ll make this publicly known. This was a total violation of my privacy. I wasn’t aware this would be public and even more shocked that the world was able to see me in an intimate moment, this was someone I was in a relationship with in our personal moment in our home. This is beyond embarrassing and hurtful. I would never consent to doing such a thing and let it be open to the world to see, clearly I was intoxicated as you can see in my face. But let me warn you, ladies.. Be careful who your sleeping with, he may be your enemy… I can’t even explain the feeling but things will be dealt with. Evil people never prevail. This was someone I once trusted/confide in and it just really opens your eyes to be careful who you’re with and what you do. You may say your piece but we know who had that in possession and who did what. I rest my case peacefully.” 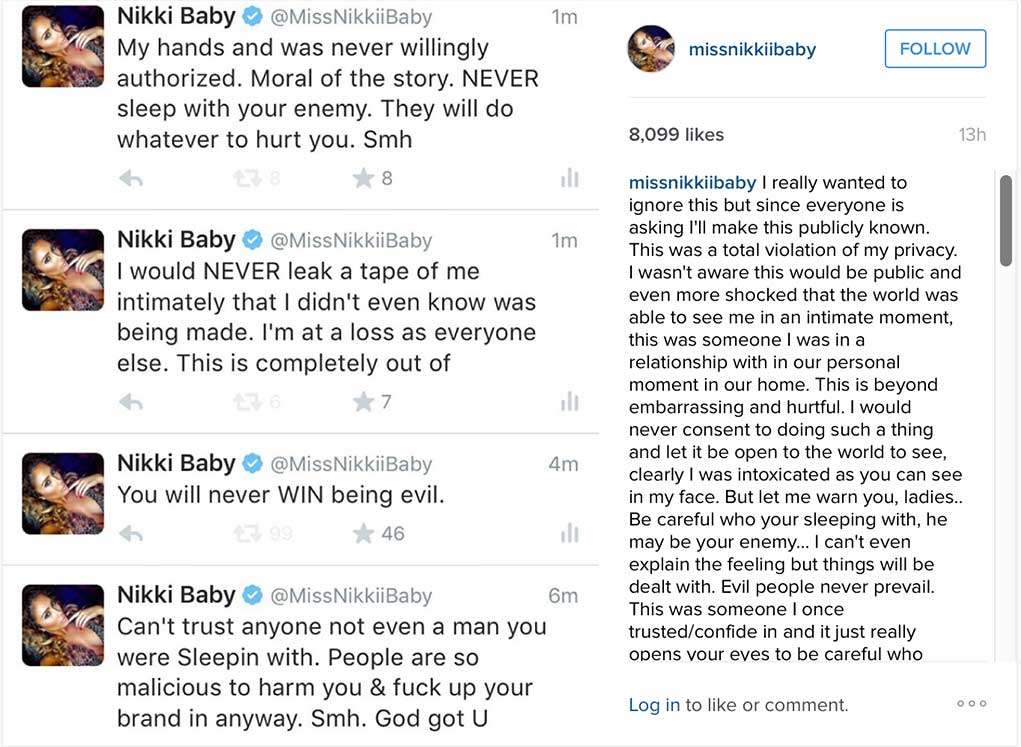